Dónal Lunny
John McSherry has been a major figure in Irish music for almost 20 years. Described by Irish Music Magazine as ‘a true master’, John is hailed as one of the finest exponents of the art of uilleann piping in the world today.
Born in Belfast to a family steeped in traditional music, John focused his energies on the pipes from an early age. By 14, John had two All-Ireland Championship titles under his belt; in 1987 he became the youngest ever winner of the prestigious Oireachtas piping competition, going on to represent Ireland at that year’s Lorient Inter-Celtic Festival as a result.
Combining with his three siblings, John formed the exciting and innovative band Tamalin, bringing their unique fusion of Irish, Rock, Eastern and Celtic music to enthusiastic audiences around the world. Their bold debut album Rhythm & Rhyme was released in 1996 to wide critical acclaim, including a four-star rating in Q Magazine.
By the mid-1990s John was becoming very busy. As well as forming the dynamic Irish trad band Lúnasa, he joined Dónal Lunny’s supergroup Coolfin. Both bands released critically acclaimed albums and toured the world extensively.
In 2001 John teamed up with life-long musical comrade Michael McGoldrick on their joint album At First Light, which was named ‘Best Traditional Album of the Year’ in Irish American News. It was from touring this benchmark album that John’s ongoing band, also named At First Light, arose.
John McSherry's Website 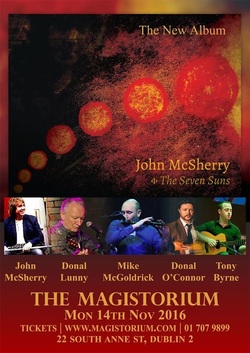 Celebrating the launch of John McSherry's new album
​"The Seven Suns"
Concerts and Recordings ​
News of concerts and recordings shall be posted here.​
Powered by